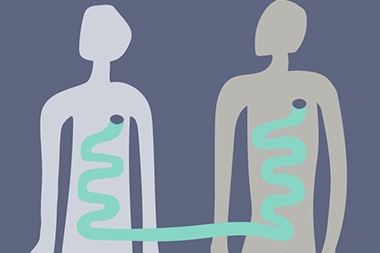 Six years ago, a 32-year-old woman underwent fecal microbiota transplantation (FMT) to treat a recurring Clostridium difficile infection (C. difficile).  The donor was the woman’s teenage daughter, who was somewhat overweight at the time but otherwise healthy.

The mother’s treatment for C. difficile was successful with symptoms disappearing and subsequent testing showing a negative result for the infection.  The patient and her health care providers were relieved since C. difficile is notoriously difficult to treat, claiming the lives of about 30,000 Americans each year, according to the Centers for Disease Control and Prevention (CDC).  The female patient also tested positive for H. pylori infection and was treated concurrently.

Initially following the FMT all seemed well.  However, then something odd began happening.

The mother, who had always been a normal weight with a BMI of 26 before the C. difficile infection, began steadily gaining weight.  Over the course of six months, the mother added 30 pounds unintentionally.  One year following the FMT, the mother met the medical criteria for obesity.  Thirty months post procedure, the woman was overweight by 41 pounds, even though she had undergone a medically supervised exercise program and a liquid protein diet.

For her part, the daughter also gained weight following transplant.  However, her weight gain was less significant and began earlier than the mothers.

The duo later outlined their findings in a paper: Weight Gain After Fecal Microbiota Transplantation.

The paper points out that although the patient’s weight gain may have been attributed to other factors, such as an improved appetite after being sick, starting of an oral contraceptive, or the concurrent treatment of H. pylori.  However, Drs. Kelly and Alang noted they still believed there was a possible link between the FMT and the weight gain.

In an interview to Scientific American magazine, Dr. Kelly said, “This patient’s weight gain was dramatic and disturbing. She told me she felt like a ‘switch flipped’ in her body after the fecal transplant, and she has been unable to get back to a healthy weight despite great efforts.”

Dr. Kelly added, “(We) need much more research and probably a national registry to follow these patients for a period of time after fecal transplant,” Dr. Kelly said. “There is a lot of excitement around fecal transplantation right now for other things; we must remember its experimental and unproven therapy.”

What scientists do know already is that lean individuals have more bacteria as well as many more different kinds of bacteria in their guts than obese people.

However, to determine what links do exist between FMT and weight, a new study was launched in 2016.  Leading the year-long clinical trial is Dr. Elaine W Yu, assistant professor at Harvard Medical School and endocrinologist and clinical researcher at Massachusetts General Hospital in Boston.

“There’s a lot of indirect evidence about the connections between gut bacteria and body weight,” said Dr. Yu.

In the control-group trial, FMT will be used from a healthy, lean individual and given to someone with obesity.  Instead of a transplant, the fecal matter is delivered in the form of an FDA-approved, freeze-dried capsule.  The study then examines the recipients over time to chronicle gut bacteria and if there is weight loss, gain or no discernable change.

Yu says study results will be available in June 2018.

Another Massachusetts-based organization, OpenBiome, has a foothold into the role of fecal transplants from a lean donor to treat obesity.  OpenBiome is the largest stool bank in the world, according to Dr. Zain Kassam, chief medical officer.  According to its website, the organization was started “to help investigators uncover the role of the gut microbiome in human health, and to discover how engineering it can drive better health outcomes.”

Interviewed by CNN, Dr. Kassam looked to the future:

“I can imagine a universe in the not-too-distant future where a microbial treatment can complement diet and exercise to deeply impact the obesity epidemic.”

Results from these studies could go a long way in helping those who battle obesity.  It may answer the burning question: If you change a person’s intestinal microbiomes, can you change their weight and body fat as well?